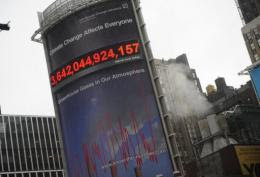 Ex-skeptic tells US Congress climate change is real: "Physicist Richard Muller, director of the Berkeley Earth Surface Temperature Project, whose two-year research was funded in part by a foundation formed by the conservative billionaire Koch brothers, said he could find no bias in other studies.
"We confirm that over the last 50 years, temperature has risen 0.9 degrees Celsius, or 1.6 degrees Fahrenheit. This is the same number that the IPCC (UN Intergovernmental Panel on Climate Change) says."
Muller told the House Committee on Natural Resources that while he remains cautious about the extent to which humans have played a role, he now hopes other climate skeptics will come on board with his findings.
"As they read and study our papers, I am hoping that many of them will reflect my belief that they are open-minded and come to agree that yes, climate change temperature increase certainly has happened," he said."

We’ve all experienced it: The frustration of entering a room and forgetting what we were going to do. Or get. Or find. Now you know it's not just you. 'via Blog this'
Posted by Dr.T at 10:39 AM No comments: Links to this post

Dr.T
I am now retired from the active practice of medicine though I am still licensed in Texas. My specialty was pain management. I had to retire do to severe chronic fatigue caused by loss of the function of my pituitary gland. I still write, teach and collaborate on research nationally. My way of getting out of the house has been to get involved in the Rockwall County Democratic party. Boy did I pick a strange time to jump in. It feels like I have been strapped to a rocket pack. But I have had it with an out of control government of the Republicans and their entire lack of competence in governing, from the national down to the local levels of government. Government is not the problem contrary to what Ronny Reagan said, incompetent,uncaring,money grubbing liars in government is the problem. Our government's subservience to runway capitalism is the problem. I will do everything in my power to expose these creeps and their hypocrisy. I am damn tired of hearing nothing but lies from the MSM.